I’m writing this, which I’ll post online and will also send to your office, in response to an incident that occurred in Pioneer Square after the Sounders game on March 15th. As a result three people were arrested, one person was stabbed and several injured in a brawl that could have been prevented. The policies of your administration continue to encourage an environment in Pioneer Square that allows this violence to continue.

While both KOMO and KIRO have published their versions of the incident, I will share mine so I can make clear to you and your administration that the lack of police presence in Pioneer Square before, during and for an extended period after sporting events is putting both residents and visitors at risk.

While walking my dogs after 5 PM yesterday I passed very close to the firefighter’s memorial in Occidental Park. As I approached I saw three people (two men, one woman) yelling at a homeless man who lying on the memorial. As I passed he responded when one of the men started yelling “What did you say?” as he then rared back to punch the homeless man several times in the head and face. When the man tried to roll away to escape the attack the aggressor kicked him several times. While the attack continued I called 911 reporting that I had just seen a man attacked, giving descriptions of everyone involved and that unless police arrived quickly that this could escalate further. While I was on the phone with 911 the second man of the original three got into a fight with another homeless man, taking the homeless man’s walking stick from him and beating him with it. The homeless rallied around to protect the victims and after a lot of yelling, shoving and some tense moments the attackers left north through the Square towards Washington. By 5:17 PM I had given my information to the 911 dispatcher, encouraged them to come quickly and given them my phone number to follow up.

I didn’t expect a rapid police response. I’ve called 911 before to report other fights on Occidental and never seen police arrive in a timely fashion. So again this time I waited. I followed the three people north through the Square with the goal of capturing a license plate number if they were going to get into a car, but they (apparently) went into McCoy’s Firehouse Bar*. A few minutes later I saw them return to Occidental to yell at a different group of men, screaming about “moochers” and “living off my tax dollars.” After I saw them leave the area again and no police had arrived, I decided to continue my walk with my dogs south along Occidental. It was by now approximately 5:25 or 5:30.

Looping back for home a few minutes later I saw police cars moving west on Main and Washington. I approached because I wanted to be able to give the officers any assisting information I could after my 911 call. When I arrived I saw this scene. 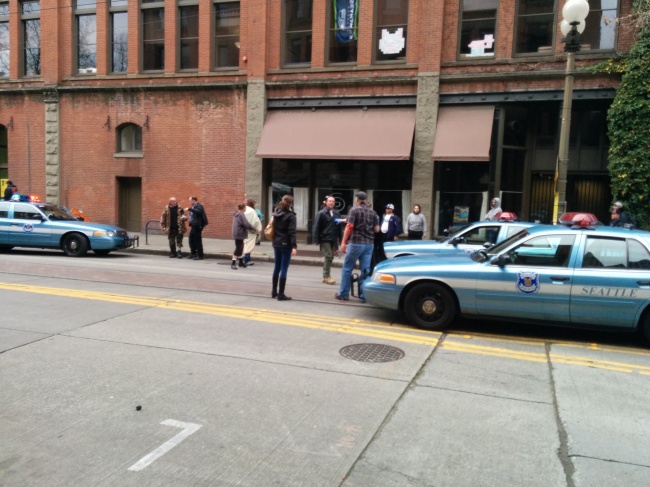 These were taken at 5:40. It shows two homeless men being questioned on the curb, the stick from the earlier beating on the ground next to them, and the female and one of the male aggressors in the street. The man is bleeding from what were explained to me later were stab wounds from a third altercation between they aggressive visitors and the homeless. The man wrapped in the “white” blanket in first photo is the original victim who was beaten and stomped for sleeping on the monument.

A homeless man was beaten and no police cars arrived. When one of the attackers was stabbed and four police cruisers, two ambulances, a fire truck and several fire department supervisor cars all arrived within minutes. After all the damage is done is this your definition of appropriate response? 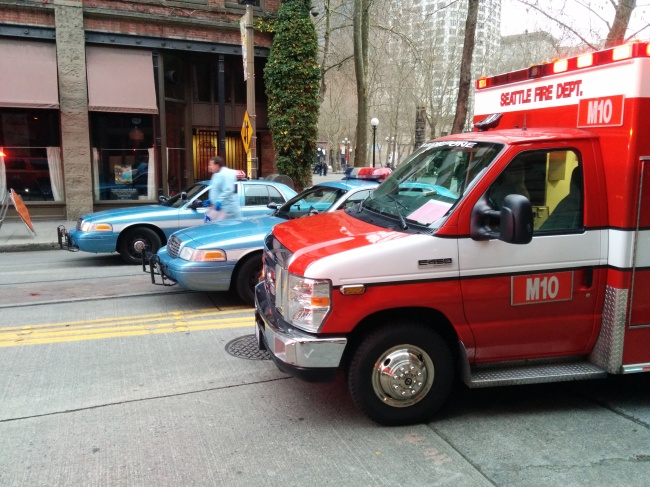 Mr. Mayor, there will be police reports to read that will give a more complete view of events. I’m not going to speculate on the events immediately before the stabbing as I didn’t witness that fight. What I did see, both from the original altercation and the aftermath, convinces me that if your administration made active policing in Pioneer Square a priority, all of this could have been prevented.

Anyone who attends a Sounders, Seahawks or Mariners game is comforted by the large police presence. Officers are there directing traffic, coordinating and controlling the “march to the match” and as people leave the stadiums are there to keep things moving along in a safe and orderly fashion. Then where do they go? Once the games are done and the CenturyLink parking lots empty Pioneer Square becomes ignored by law enforcement until there is blood in the street.

At the time of this incident there was a police cruiser parked at 1st and Washington. It was empty. If there had been even a minimal police presence then don’t you agree that the likelihood of a vicious attack like this would have gone down? If the first attack had been deterred then the odds of the second, more serious fight which led to the stabbing would have also been prevented. Maybe the first attack would have happened even in view of the police, but they could have arrested the attackers. A man in handcuffs can’t start a new fight, nor get stabbed in response.

Without police in Pioneer Square to greet the high intoxicated and volatile visitors who pour out of the bars you are inviting violence.

I’m also not talking about a couple of mounted officers riding through, or four or five bicycle officers gathered on one corner. To be effective the officers need to be walking throughout the park. Instead of standing together talking to each other, officers should be talking to citizens and making themselves visible. Engagement, not intimidation. They have to actually engage the community to provide a presence that will deter most violence.

Pioneer Square is a critical part of the downtown renaissance that is happening in Seattle. We can dig tunnels and knock down highways, build living space and open restaurants but unless you make a commitment to keep Pioneer Square safe all the 12th Man signs in the world won’t matter. Pioneer Square is the southern anchor of Seattle’s downtown yet the policies of the Murray administration continue to give this critical neighborhood short shrift in public safety and law enforcement investment. Pioneer Square is a historic district but what I saw yesterday makes me wonder if the Murray Administration has just written us off to the historic dangerous and violent reputation of the area.

When I tell people in other parts of King County that I live in Pioneer Square their reaction is telling. Too often they think of the area as the equivalent of a third world conflict zone, a view fed by media reports that focus on violent confrontations such as yesterday’s. How long before people from other parts of the area think of coming to Pioneer Square is something they have to do in order to attend an event instead of something they want to do? Are we that willing to throw away all the positive emotion that came to PSQ and SODO through the Seahawks parade and celebration? If you want Pioneer Square to be the southern parallel to the tech industry explosion of jobs, residences and businesses in South Lake Union then you, Mr. Mayor, must make an investment to keep everyone in Pioneer Square safe. Business can’t thrive in an area where you aren’t willing to make a commitment to safety.

In closing Mr. Mayor here is the last photo I took last night showing the police arresting the original attacker. The Seattle Police Department officers I dealt with were professional and courteous. They listened not only to my account but to the comments and feedback of others in the area who saw the incident. I appreciate their service to our city. Support them, and the residents of Pioneer Square, by directing the police to make a presence in Pioneer Square a priority all day long on game days, and not just in response to assaults and calls for help.

* I found out this morning that the assailants left the Square and went into McCoy’s Firehouse where they asked the owner to call the police because “they had been jumped by 20 or 30 men” in the Square. Apparently several police officers responded and spoke to the men, but no action was taken because obviously the men left the bar went back to the Square and continued their aggressive behavior which led to the stabbing.