I have switched between iOS and Android for years now. I bought the first Nexus One, and have tried everything from the iPhone 4s and 5 to Motorola Android Razr. When I joined Rightside last summer I was carrying an black iPhone 5 (Verizon) as my personal device. The company was on a single AT&T account and 90% iPhone users so it was easy to take the new iPhone 5 they gave me and keep going.

One of the strengths of Apple’s iPhone world is that with only one or two phone form factors to support that gives them a HUGE advantage in attracting third party developers to their devices. That includes simple things like cases but also more complex add ons like battery packs.

I use my phone a lot which means I burn through a charged battery like it was nothing, even more so when I’m traveling. My savior with my iPhone was a series of Mophie Juice Packs, both the Juice Pack Air and later the Juice Pack Helium. Going from a personal iPhone 5 to a company iPhone was great — move all my apps over and my accessories, like the Mophie, just worked great. Score one for Apple’s ubiquitous form factor. Life was good.

But the siren song of Android called me when the Nexus 5 was released last October. I was torn but made the plunge anyway back towards the latest Android (“Kit Kat”) and it’s customizations and flexibility. Life was still very good.

Despite the occasional frustrations about the Nexus 5’s battery life I was very satisfied. The bigger screen and faster CPU made giving up my iPhone and it’s companion Juice Pack ok. For a while.

Getting ready for my Singapore trip with it’s 18 hour flights each way made me realize that I needed to find a battery case solution for the Nexus. Mophie makes cases for the top end Samsung and HTC Android phones, but with the fragmentation of Android devices there aren’t many players making good cases for the rest of the market.

Searching Amazon I found the LimeFuel battery case for the Nexus 5. Similar design to the Mophie except instead of snapping together from the top and bottom, it comes together front to back. At 2860 mAh it has a much bigger capacity than the Mophie Air or Helium (1700 and 1500 mAh respectively) and like similar solutions it charges via a micro-USB port at the botttom, with a button to activate the battery and view current charge level through a series of LEDs.

You can see the LimeFuel compared to the Mophie Juice Pack Air in the shots below.

It works, but it’s no Mophie. The fit and finish are adequate though the front/back design makes taking the case on and off a real challenge. The battery seems to discharge very quickly though it helps avoid those desperate searches for a power outlet.

I’ve been using the LimeFuel case for a while and it does the job. I certainly can’t complain about the battery power it provides though getting it and the Nexus to a full charge when it’s attached is kind of hit or miss. Cosmetically it has already started to show signs of wear around the corners. I often slide my phone into a pocket of my pants or laptop bag top first so that when I pull it out I can bring it straight to my face without needing to reorient it. The nice rubbery coating on the case has already worn off the top corners, and I imagine much of the rest will wear off over time. 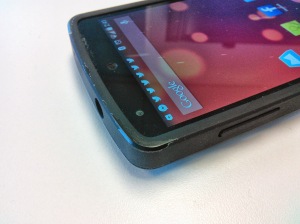 When I compare this to the Mophie packs I’ve used them for long periods and except for any scratches caused by dropping the phone they have always looked as good as new.

The Mophie Juice Packs are the best battery cases I’ve found for any phone. If they have one that fits your device, get it, and you’ll be pleased with the added battery life and protection it provides. They are almost good enough to make me reconsider the iPhone in my drawer.