I love photography, but never believed I’d make any money from it. I thought a friend might “hire” me to take some headshots or maybe I would enter a photo contest or two. At best I hoped I’d be able to have collect enough good shots to have an exhibit in a local coffee house or gallery. Licensing and publishing my photos just seemed too far out on the horizon.

Last year I was contacted about licensing one of my photos for a book. It wasn’t particularly unique shot. It was just a landscape of a stoney Massachusetts beach on a fall day. I didn’t take it with selling it in mind, I just liked the image, set my camera and clicked the shutter. Since fifteen years passed between taking the picture and its publication, there’s a story behind it. This post is my chance to share the photo and the story.

I took the picture using a Minolta Maxxum SLR film camera in Marblehead, MA. I’d gotten the camera as a present in 1996, and it was my first serious camera. It was the camera that got me hooked on the science and creativity of photography. I took it almost everywhere.

In October 1997, I was in my second year at Harvard Business School. My father was visiting from Kentucky to enjoy a New England fall. He hated cities, airplanes and “too many people” but he came anyway to visit his son at Harvard. He always wanted to see “the country” more than any city, so wandering around Boston wasn’t really his thing. We decided to take a road trip up the coast “just to look around”. I had been up to Rockport and Marblehead before, stopping to take pictures of the coast, of boats and even of the red cab shack that had become known as “Motif #1“.

I don’t remember why I stopped along the beach, but it seemed like a good spot. I liked the surf, the rocky beach and blue skies. I’m sure Dad got out of my old white SUV to smoke his ever present Camels while I set up the tripod and camera. I shot mostly color slide film back then, though I can’t remember what kind or speed it was, and never took any notes about the exposure. What’s funny is a do remember Dad telling me to take my time, that he was in no hurry at all and was just “happy to be there” with me. Two or three shots later we got back in the truck and went on. Later, after sending the film out for developing I thought it was a “keeper” and filed it away with all the other “good ones”. I had some prints made and framed, giving one to Dad for his trailer back in Kentucky. He hung it in his bedroom, just over the dresser. He’d mention it sometimes, talking about his visit to me in Boston and how it was “pretty country” once you got away from all the people.

Years later I started putting more photos online I used a slide scanner to digitize all those New England shots, along with many others I’d take over the years. I wasn’t very consistent in my titling and labeling, but I gave that one a title of marblehead beach 1097. It became just one of many photos in my online portfolio, though somehow those New England pics where some of my favorites.

As I was leaving Sony in 2007, planning on the first of several cross country road trips from Los Angeles I used my employee discount to purchase the first Sony digital SLR camera and lenses. Sony had bought Minolta’s camera business, and was putting the Sony brand on it. That Sony A100 and it’s lenses were direct descendants of my old Maxxum. It was almost like being back where I started.

Being on the road energized me to take more photos. I took lots of photos on road trips. Scores of photos on the farm. Dad got used to me always pointing a camera at him, the dogs, the horses, or just the hills. One of my best photos was of Dad and his mule. Folks back home liked it so much, they hung it in “his” booth at the local greasy spoon. 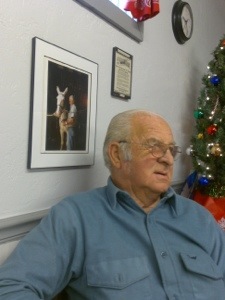 The Book
Last year I got a Flickr message and comment on the photo. While I don’t exactly know how they found it, the folks at Harper Collins wanted to use the photo as the basis for a book jacket. At first I thought someone might be playing a joke on me. Who’d want that fifteen year old photo?

They were serious about it. After some Photoshop the book jacket turned out really well.

Christine was excited for me, but I didn’t tell anyone about it for months. I guess I wasn’t sure they wouldn’t change their mind and use another photo. In the end I signed the license agreement and sent them the high resolution slide scan. The book was released on March 5th with my photo on the cover and credit inside the jacket.

The book is by Elizabeth Graver and is set in Massachusetts. The description from Amazon describes it:

A precisely observed, superbly crafted novel, The End of the Point by Elizabeth Graver charts the dramatic changes in the lives of three generations of one remarkable family, and the summer place that both shelters and isolates them.

Ashaunt Point, Massachusetts, has anchored life for generations of the Porter family, who summer along its remote, rocky shore. But in 1942, the U.S. Army arrives on the Point, bringing havoc and change. That summer, the two older Porter girls—teenagers Helen and Dossie—run wild. The children’s Scottish nurse, Bea, falls in love. And youngest daughter, Janie, is entangled in an incident that cuts the season short and haunts the family for years to come.

An unforgettable portrait of one family’s journey through the second half of the twentieth century, Elizabeth Graver’s The End of the Point artfully probes the hairline fractures hidden beneath the surface of our lives and traces the fragile and enduring bonds that connect us.

How did the photo get picked? I never really asked. Didn’t want I jinx it I guess. There have to be thousands of amazing photos available for licensing. Clearly the subject matched the book. Maybe I just stumbled into good SEO with the title and was easy to contact. Maybe it was luck. Maybe Dad, who passed away in 2011, visited a big city and nudged an art director in New York to pick the same photo that was hanging in his bedroom. Not sure it really matters.

But I do like that last idea best. Thanks Dad. 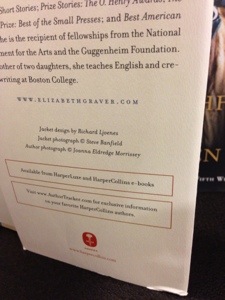